At Avail, we surveyed a total of 4,000 would-be vacationers to learn about Americans’ biggest travel concerns, top U.S. cities for summer vacation according to population size and specific reasons for choosing a large, mid-sized, small or tiny city as a vacation destination. We also discovered Americans’ preferred method of travel for their summer trips.

Specifically, our study revealed 40 of the most popular summer travel cities divided into top-10 lists for four different types of cities: large, mid-sized, small and tiny.

In this analysis, we learned that while some of the most popular cities in America are still very desirable for summer vacation, a number of under-the-radar cities have become top destinations for summer travel, according to our data.

Now, let’s take a look at the results.

Two major coastal cities were the favorites for this category: New York City and Los Angeles. New York City placed first on the top-10 list of favorite large cities to visit this summer. A trip to New York City has long been a bucket-list item, as its world-class museums, Broadway show venues and renowned multicultural food selection make it a top vacation destination.

Las Vegas, known for world-class entertainment and casinos, placed third and was followed next by Jacksonville — the most populous city in Florida — as the fourth most-desired large-city destination.

The Midwestern city of Chicago, home of the Bears, Bulls, Cubs and White Sox, was the fifth most-favored large-city destination, and the waterfront city of San Diego — the home of near-perfect weather — followed closely behind.

Nashville, TN, home of the Ryman Auditorium and the most prestigious country music venue, the Grand Ole Opry, came in seventh for big-city-bound travelers.

The financial and business center of Charlotte, NC, was the next most popular large city for summer vacation, followed by San Francisco, home of the Golden Gate Bridge and the former Alcatraz Federal Penitentiary. Lastly, Houston — the fourth-largest city in the U.S. — rounded out the favorite big city summer vacation destination list.

What factors did summer travelers consider when deciding upon their preferred big city destination? Sights and landmarks were the number one consideration, followed by affordability in second. Most travelers love eating good local food on vacation, and listed food/dining as the third most crucial factor when deciding upon a big-city travel location.

Many students fall in love with Miami during a spring break getaway, and that’s reflected in our favorite mid-sized city list as Miami, with attractions and events like South Beach and Art Basel, came in at number one.

Atlanta, home to the Georgia Aquarium, Centennial Olympic Park and the World of Coca-Cola, placed second. A Hawaiian vacation is a must for many newlywed couples, and the beautiful city of Honolulu ranked as the third most-popular mid-sized location.

Tampa, another Florida favorite known for internationally acclaimed theme parks and vibrant nightlife, was the next most popular choice among our respondents.

New Orleans — affectionately known as NOLA to its residents — is synonymous with the French Quarter, Mardi Gras, New Orleans Jazz & Heritage Festival and amazing Creole cuisine. It placed right in the middle of our vacationers’ favorite mid-sized cities.

Coming in ninth was Tucson, AZ, a popular destination thanks to the Sonoran Desert and tasty Southwestern cuisine. Finally, Long Beach, CA, with the popular Pike at Rainbow Harbor, garnered enough votes to make it onto the top-10 mid-sized city list.

Vacationers seeking top mid-sized cities were looking for classic experiences — sights and landmarks, along with food and dining. The outdoors was selected as the third most-compelling reason to visit a mid-sized city, followed by culture in fourth and affordability in fifth.

Sometimes the hustle and bustle of a large city makes quieter, small cities more desirable. Good weather may also play a role: our survey showed that Florida, with two cities, Nevada, with two cities, and North Carolina, with one city, are popular destinations.

Orlando, FL, is a great base from which to enjoy Disney World, Universal Studios, Legoland and the Kennedy Space Center, so it’s no surprise that respondents rated this family-friendly hub of entertainment as the top small city to visit this summer.

Pittsburgh, the Steel City, was next on our list, followed by North Las Vegas for its proximity to the Las Vegas Strip and Red Rock Canyon National Conservation Area.

It’s no wonder that St. Louis came in as the fourth most-popular destination in this group, as the city has numerous attractions including the iconic Gateway Arch, Anheuser-Busch Brewery and T.S. Eliot House.

Fifth and sixth place, respectively, went to St. Petersburg, FL, with its award-winning beaches and Salvador Dalí Museum, and Reno, NV, because “The Biggest Little City in the World” is quite an entertainment hot spot.

Anchorage, AK, known for its glacial views, miles of hiking and biking trails and spectacular wildlife viewing opportunities, was selected as the eight most-popular small U.S. city to visit.

Similar to mid-sized city considerations, survey participants ranked affordability and culture as least important when considering the reasons to visit small cities. Sights and landmarks were the most significant attractions, followed by food and dining.

Many of the top small cities boast major outdoor attractions, which makes it no surprise that the outdoors was the third most-popular factor when deciding which small city to visit.

Adventurous vacationers may overlook the tiniest cities when planning trips, sometimes because of a lack of familiarity, but there are some tiny city gems awaiting your next vacation.

Fort Lauderdale, FL, less than an hour’s drive north of Miami Beach, is a favorite among locals who want to escape the crowds but enjoy great beaches, fun entertainment and a rich arts and culture scene. These are the main reasons why Fort Lauderdale ranked number one on our list of top tiny vacation cities.

Tallahassee, the capital of Florida, is well known for its gardens and parks, along with Florida State University's Museum of Fine Arts. Those attractions, in addition to numerous historic neighborhoods, made Tallahassee rank as number two on the tiny city list.

Little Rock, which came in third, is the state capital of Arkansas and home to the Clinton Presidential Center.

Huntington Beach, CA, and Ontario, CA, were the fourth and fifth most-popular tiny cities to travel to. Huntington Beach boasts 8.5 miles of prime surfing beaches and Ontario is popular for its cultural attractions, as well as its proximity to Los Angeles and Palm Springs.

Vacationers who chose tiny cities expressed different reasons for their travels than those who anticipate traveling to larger cities. Events were paramount, followed by an interesting factor: connectivity and the ease of getting to the final destination. Shopping was the third most-compelling reason to visit a tiny city this summer, with affordability and culture identified as being least important.

71% of survey participants said yes to a 2022 summer vacation, while 29% were content to stay home, perhaps due to financial concerns related to inflation or unease around COVID-19.

Whether our survey respondents favored large, mid-sized, small or tiny cities, their preferred transportation method was a significant consideration. A whopping 68% are planning a road trip vacation, followed by 26% who are choosing airline travel. Bus and train travel were not favored, as only 3% mentioned either.

Finally, summer travelers noted a variety of concerns and worries. 37% put finances and inflation at the forefront, while 24% are anxious about contracting COVID-19. 14% were stressed by the costs of traveling via planes, trains, automobiles and buses, and 6% were concerned about taking time off from work to take a vacation. A minority — 5% — felt that international quarantine requirements were a significant factor that could impact their 2022 travel plans.

Survey respondents told us that they would first like to travel to mid-sized cities, with large cities as a second choice. Small cities were the third most-popular destination and tiny cities were the least desirable.

One reason that vacationers like to travel to small U.S. cities is because of their proximity to major vacation destinations. North Las Vegas, NV, is a small city close to Las Vegas that may feel more accessible to some travelers who want to experience the big city without staying there. And sometimes small cities hold the most desirable attractions: think Orlando, FL, and Disney World.

Tiny cities can be a draw for certain travelers because of their local culture, like Amarillo, TX, with its Cadillac Ranch public art installation.

Many mid-sized destinations are beach friendly, like Miami, Honolulu, Virginia Beach, VA, and Long Beach, CA. Large cities like New York City and Los Angeles will always have a certain allure because they are flashy, bustling and offer a variety of cultural experiences.

Post-pandemic road trips are favored by most (68%), partly because airline travel has had many challenges lately, like last-minute cancellations, extremely long security lines and occasional unruly passengers. Having control of one’s itinerary, being able to make unplanned stops and having the ability to enjoy the rhythm of the road heavily influenced choices here. Still, 26% preferred to travel by plane.

Additionally, with so many people on the road this summer, it’s important to make sure you’re in a car that can safely and efficiently get you from the start of your trip to the final destination.

It’s a busy and more expensive road to vacation paradise this summer, but travelers are ready to go after staying home for the better part of two years. Yes, 2022 presents unique challenges, but getting away this summer seems more important now than ever.

All data found within this report is derived from a survey by Avail conducted online via survey platform Pollfish from May 31 - June 5, 2022. In total, 4,000 American adults were surveyed. This survey was conducted over a six-day span and all respondents were asked to answer all questions as truthfully as possible and to the best of their knowledge and abilities.

For more information on Avail’s research or to request graphics or an interview about this study, please contact sam.radbil@availcarsharing.com. 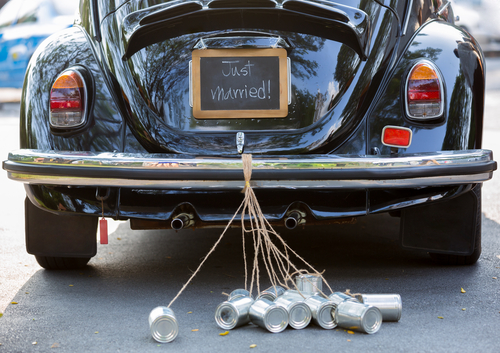 Affordable Honeymoon Destinations for Every Budget

If your dream wedding leaves you low on funds, these 9 affordable honeymoon destinations in the U.S. offer plenty of romantic experiences for those on a budget. 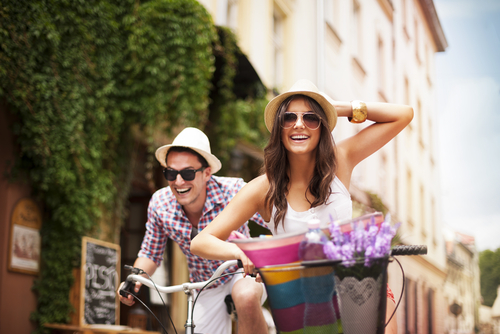 The Happiest Cities in the U.S. & Why You Should Visit Them

Ensure your next adventure is full of smiles by visiting some of the happiest cities in the U.S. We rounded up 15 for you to add to your travel wish list. 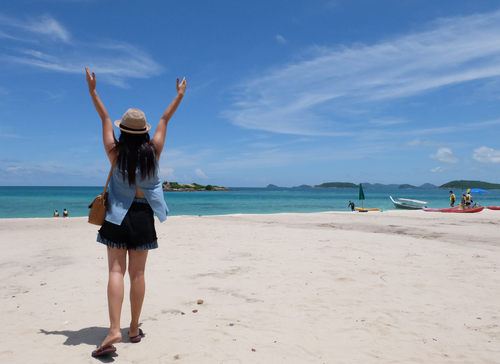 The Ultimate Guide to Traveling for Teachers

Teachers have great opportunities to travel when not teaching. Check out this travel guide and how Avail can help with travel plans.